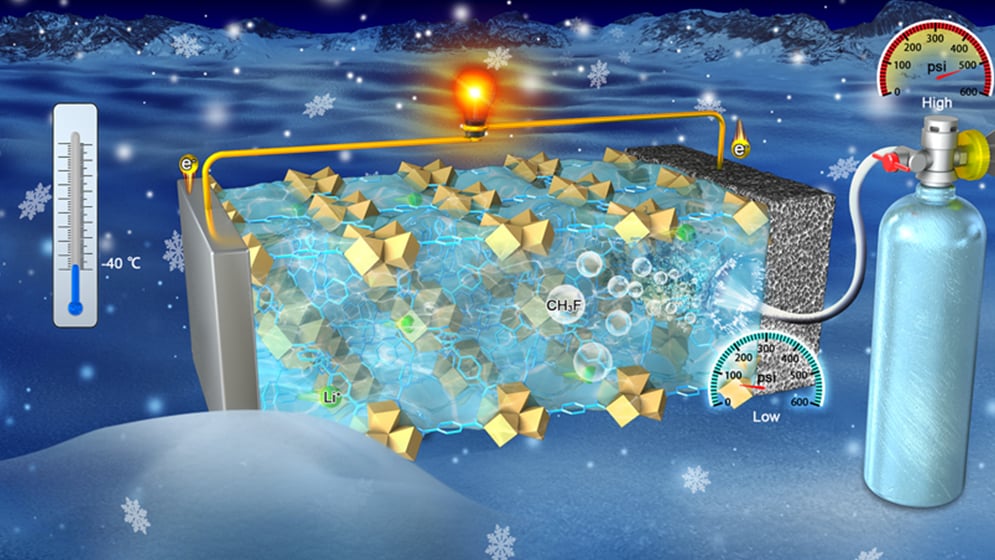 The research leader, Zheng Chen, professor of nanoengineering at the Jacobs School of Engineering at the University of California, San Diego, said: "By trapping gas molecules, the membrane can act as a stabilizer for volatile electrolytes."

The new separator can improve battery performance at ultra-low temperatures. The battery cell using the diaphragm can operate at minus 40°C, and the capacity can be as high as 500 milliampere hours per gram, while the commercial diaphragm battery has almost zero power in this case. Researchers say that even if it is left unused for two months, the battery cell capacity is still high. This performance shows that the diaphragm can also extend the storage life. This discovery allows researchers to achieve their goal further: to produce batteries that can provide electricity for vehicles in icy environments, such as spacecraft, satellites, and deep-sea ships.

This research is based on a study in the laboratory of Ying Shirley Meng, professor of nanoengineering at the University of California, San Diego. This research uses a particular liquefied gas electrolyte to develop a battery that can maintain good performance in an environment minus 60°C for the first time. Among them, the liquefied gas electrolyte is a gas that is liquefied by applying pressure and is more resistant to low temperatures than traditional liquid electrolytes.

But this kind of electrolyte has a defect; it is easy to change from liquid to gas. Chen said: "This problem is the biggest safety issue for this electrolyte." The pressure needs to be increased to condense the liquid molecules and keep the electrolyte in a liquid state to use the electrolyte.

Chen's laboratory collaborated with Meng and Tod Pascal, professor of nanoengineering at the University of California, San Diego, to solve this problem. By combining the expertise of computing experts such as Pascal with researchers such as Chen and Meng, a method has been developed to liquefy the vaporized electrolyte without applying too much pressure quickly. The personnel mentioned above are affiliated with the Materials Research Science and Engineering Center (MRSEC) of the University of California, San Diego.

This method borrows from a physical phenomenon in which gas molecules condense spontaneously when trapped in tiny nano-scale spaces. This phenomenon is called capillary condensation, which can make the gas become liquid at a lower pressure. The research team used this phenomenon to construct a battery separator that can stabilize the electrolyte in ultra-low temperature batteries, a liquefied gas electrolyte made of fluoromethane gas. The researchers used a porous crystalline material called a metal-organic framework (MOF) to create the membrane. The unique thing about MOF is that it is full of tiny pores, which can trap fluoromethane gas molecules and condense them at relatively low pressure. For example, fluoromethane usually shrinks at minus 30°C and has a force of 118 psi; but if MOF is used, the condensation pressure of porous at the same temperature is only 11 psi.

Chen said: "This MOF significantly reduces the pressure required for the electrolyte to work. Therefore, our battery can provide a large amount of capacity at low temperatures without degradation." The researchers tested a MOF-based separator in a lithium-ion battery. . The lithium-ion battery consists of a fluorocarbon cathode and a lithium metal anode. It can fill it with a gaseous fluoromethane electrolyte at an internal pressure of 70 psi, far lower than the pressure required for liquefying fluoromethane. The battery can still maintain 57% of its room temperature capacity at minus 40°C. In contrast, at the same temperature and pressure, the power of a commercial diaphragm battery using a gaseous electrolyte containing fluoromethane is almost zero.

The micropores based on the MOF separator are the key because these micropores can keep more electrolytes flowing in the battery even under reduced pressure. The commercial diaphragm has large pores and cannot retain gaseous electrolyte molecules under reduced pressure. But microporosity is not the only reason the diaphragm works well under these conditions. The diaphragm designed by the researchers also allows the pores to form a continuous path from one end to the other, thereby ensuring that lithium ions can flow freely through the diaphragm. In the test, the ionic conductivity of the battery using the new diaphragm at minus 40°C is ten times that of the battery using the commercial diaphragm.

Chen's team is currently testing MOF-based separators on other electrolytes. Chen said: "We have seen similar effects. By using this MOF as a stabilizer, various electrolyte molecules can be adsorbed to improve battery safety, including traditional lithium batteries with volatile electrolytes."

Prev: American scientists have developed a new type of molten salt battery, which is expected to achieve grid-level energy storage at a lower temperature and low cost.

Next: American scientists have developed a new type of molten salt battery, which is expected to achieve grid-level energy storage at a lower temperature and low cost.